Those associated with the industrial real estate industry will attest that the post-COVID-19 industrial real estate boom has been unlike anything they have ever experienced in their career, despite how long they have been in the industry. Over the course of the last 24 months, developers have constructed buildings at a record clip, vacancy has been at a historic low, and the annual rental rate escalation has never been outpaced. While this is most reflective of the warehousing and distribution industry, manufacturers have also felt the constraining effects of the real estate market.

Vacancy rates may have bottomed out

National vacancy rates have bottomed out the last two quarters at just under 4% and will be rising (ever so slightly) for the foreseeable future. The chart below shows the expected modest rise in vacancy rates over the next five years. 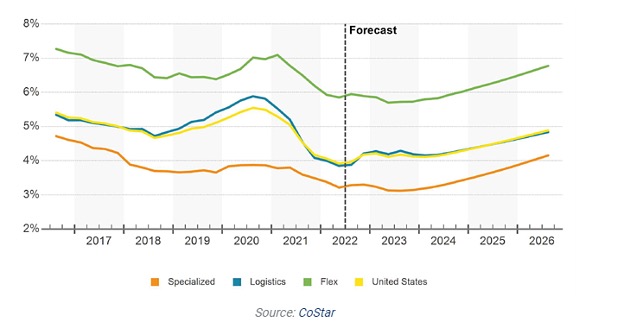 Deliveries for the next five years to outpace the previous five

While there is some concern in the overall economy due to indicators of a recession, the data suggests the bottoming out in vacancy rates is because of the number of buildings scheduled to come online over the next five years. The chart below shows national net deliveries and how it relates to vacancy rates. 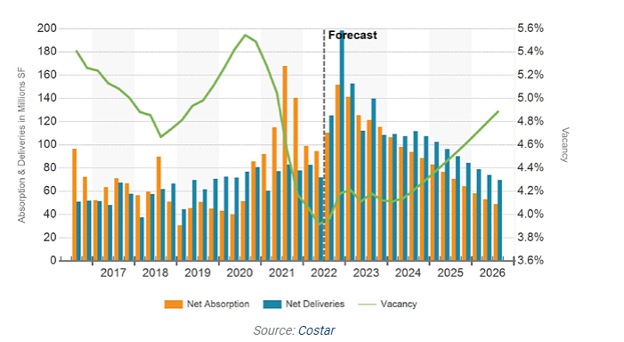 The rapid escalation in rent since the pandemic had tenants wondering when a ceiling would be in sight. Projections show that annual rent growth has peaked and will be on a sharp downhill slide, although it will not feel “normal” until late 2024 or early 2025. Despite several naysayers that have been predicting a “rent bubble,” project growth statistics do not suggest base rates will be declining. 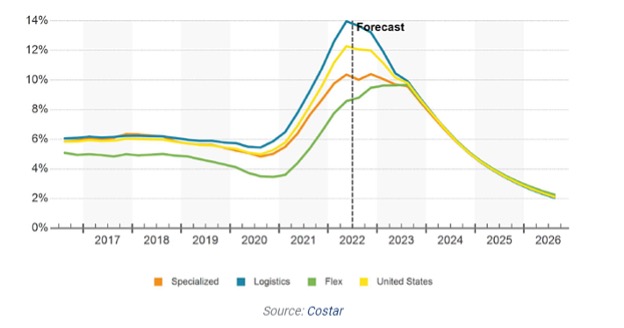